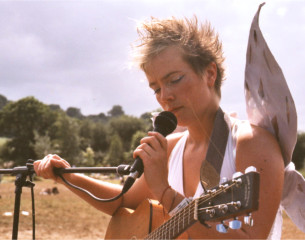 Jess Goyder writes and performs elegant and soulful songs for piano, guitar and strings. Jess takes inspiration from a childhood in India and Ethiopia, life as a Barcelona angel street statue and music tours from Canada to South America. She has appeared on stages of all shapes and sizes, including the main stage at Cornbury after Jools Holland, numerous Glastonbury Festivals and over 1200 people at One World Celebration. Her ongoing collaborations include multi-platinum writer/producer Alan Glass (Aretha Franklin) and Abbey Road’s Alan Snelling.

There’s a limpidity to Jess Goyder’s piano playing and a life-enhancing quality to her songwriting that enable her to connect to the listener like few other performers of her generation. Coupled with a voice of breathtaking beauty which soars effortlessly into a crystal-clear falsetto, songs like Find Your River, Tumble and End Of The World have prompted appreciative comments from Radio 2 stalwart Johnnie Walker – “Really enjoyed listening to her CD. She has a really lovely voice” he remarked – and Jean Roussel, the keyboard-player, producer and arranger behind numerous Cat Stevens albums and some of Bob Marley and The Police’s greatest hits. “The most extraordinary voice I’ve heard in years,” stressed Roussel who invited Jess to perform every song she’d ever written at his house in France.

At the opposite end of the musical spectrum, Jess has also collaborated with dance outfit The Love People. The result, the dreamy, heady Everything Has Changed, was picked up by DJ and producer Judge Jules who put the track on a summer loop in Ibiza. At the end of 2011, she teamed up with the producer Sean Hargreaves who brought together some of the UK’s leading musicians to record an EP which includes Sweet Sweet Sand, a song which successfully marries a funky groove to a languid vocal worthy of Nancy Sinatra or indeed Lana Del Rey. 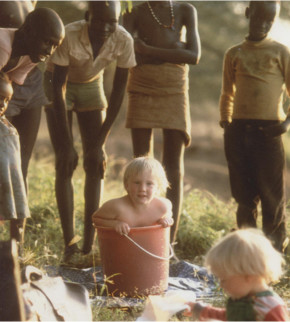 Jess Goyder’s life story is as remarkable as the music she makes. She was born to aid-worker parents and spent her first four years in India. The family then moved to Ethiopia where her father directed the Oxfam relief effort during the famine. “In our back yard, we used to make dens around all the crates of unusable aid that was sent to Addis Ababa, including a box of left stiletto shoes and empty My Little Pony lunch boxes. We used to leave at dawn to visit projects and feeding camps.” All things, it seems, that you never get used to or at least never forget. “Despite what was all around us, my songs are positive,” reflects Jess who was instantly drawn to music as a child. “Music and rhythm was everywhere in Ethiopia. I started piano lessons in Addis age 6.”

Solace in drama, art and music

Returning to Britain age 8 was a huge culture shock, “I found solace in drama, art and music, painting giant murals of the tropics on my bedroom walls. I obsessed over Africa, as far as you can fall madly in love with a continent, until I returned much later and put it to rest.” Her classical training on the piano under the aegis of English composer Lionel Sainsbury was a boon to the music-thirsty teenager, though she admits she never learnt to sight-read.

Going completely and permanently deaf in one ear would have put paid to most people’s musical ambitions but not Jess. Her music may at times be gentle and soothing, but she is made of stronger stuff. “It clarified what my life was for. My songwriting exploded after that,” says the creative all-rounder who studied Fine Art, film and photography, exhibited at London’s ICA and is currently helping develop mobile apps inspired by her songs.

Her musical wanderlust took her to Australia, Canada, extensive travels in South and Central America and Cuba, as well as her beloved Barcelona, a city she returns to time and time again. While based in Catalonia, she performed with Brazilian musicians and developed a striking singing street statue act – “the Angel” as she calls the character that caught the eye of tourists and locals alike. “I funded my Spanish course from music and street statue-ing alone. After a year I knew I could make a living from my music,” reflects Jess who now speaks fluent Spanish. Even if she concedes to using bad Portuguese in Calling The Alchemists, a composition about a girl with a book of spells that is more autobiographical than she lets on, and is reminiscent of Brazilian novelist Paulo Coelho. 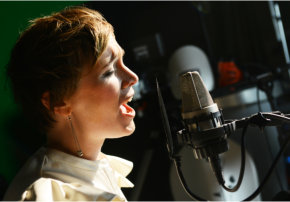 Inspired by archetypal singer-songwriter Joni Mitchell, punk pioneer Patti Smith and jazz icon Nina Simone as well as by the flamboyance of Tori Amos, the brooding intensity of Portishead’s Beth Gibbons and the ominous Alfred Hitchcock film soundtracks composed by Bernard Herrmann, Jess has appeared on stages of all shapes and sizes.

“Unsurprisingly, Find Your River is about finding your way through life,” she states self-deprecatingly. “Perhaps the nomadic fluidity of my childhood has made it much harder for me to fit into what would conventionally make most people happy. Whatever happens, I keep coming back to my music. I trust this path. Music is the constant thread that runs through my life. The love of my life. Singing, writing, performing, composition, the visual side, being entrepreneurial, building the community around my work. I see all of it as creative.”

Jess Goyder is one of the UK’s best-kept secrets but it won’t be for long. Her self-belief is admirable, contagious and fully justified.

Text by Pierre Perrone, music reviewer for The Independent